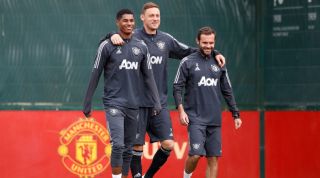 Manchester United’s escape from the storms of Manchester to a week on Spain’s Costa del Sol means sunny 20C temperatures – 15C above home, where rain and high winds are forecast all week.

United haven’t visited southern Spain since a 2018 draw in Sevilla which was the beginning of Jose Mourinho’s downfall. And they haven’t taken a training break there for over 20 years.

United are in the hills of Benahavis, 10 miles west of Marbella and 40 of Malaga, Spain’s sixth biggest city. It’s a shame that most tourists turn right out of Malaga airport and miss out on the fine city of Malaga itself.

Malaga CF, Champions League quarter finalists under Manuel Pellegrini in the year United last won the league, have fallen hard towards the bottom of the second division. On Sunday, Malaga’s ultras organised a pre-match ‘funeral’ to mark the death of their club with the owners, local council, mayor and more all blamed. Juan Mata, David de Gea and Nemanja Matic were there to see Malaga defeat Numancia, a rare win (thanks to a 90th minute goal) which lifted them out of the relegation zone.

While new signing Odion Ighalo will stay in Manchester, the rest of the squad will spend much of their time ensconced in their training camp in a region used to hosting Northern European, Chinese and Russian football teams.

Marbella – ‘Marbs’ to reality TV stars and Essex hairdressers – has become football’s winter training capital, because of the world class facilities and the milder, sunnier weather of Iberia. Tourism is Spain’s biggest business and superb hotels are otherwise under-utilised in January and February.

Marbella’s fashionable status means it can also be attractive to the marquee players.

“There are far worse places to come to in the world than here,” smiled Dimitar Berbatov when I met him there two years ago as he trained with Indian team Kerala Blasters. Along with his former United team-mate Wes Brown and their manager Rene Muelensteen, they did their pre-season based in a luxury hotel overlooking the sea near Marbella.

The area has become more popular in recent years because of the political situation at the other end of the Mediterranean in Turkey, formerly a go-to venue for training. German, Russian and Dutch clubs switched to Spain or Portugal in 2017 while Astana, United’s recent Europa League opponents, were there last month.

United have trained in the UAE and Qatar in recent years, but the decision to go to Spain was made at the start of the year because the political situation in which Iran and the USA went toe-to-toe in the Gulf.

Spain’s stability benefits from that, though United have no games planned. German and Dutch teams play friendlies – Dynamo Kiev played 12 games in two weeks in 2018, while 200 fans of Dutch club Feyenoord travelled to see their team play. And took a holiday themselves, it must be said.

It’s the competitive friendly games which appeal most and unlike on some summer tours which are paid for by promoters and sponsors, the clubs pay for their own trips and want them to work.

PFA Player of the Year award 2020: Who are the favourites to win?

Compared to former mid-season breaks, it’s all very conventional. In 1984, following early exits in the FA and League Cups, United took two winter trips to North Africa. First, a January sortie to Algeria for which the club were paid £15,000 to play an Algerian XI. They drew 0-0 in front of 35,000. Or 15,000 according to another estimate.

No journalists travelled to cover the game, while the players were spooked when their Air Algeria 737 developed a fault 15 minutes after take off.

“Everything about that trip was a nightmare,” recalled full-back Mike Duxbury, while not going into any more detail other than saying: “It was one of those places that wasn’t particularly welcoming and memorable for the wrong reasons.”

“I remember that our hotel pool had no water in it,” former United and Arsenal striker Frank Stapleton tells FourFourTwo. “It was an awful game where we couldn’t really lose to save our name – but nor could the Algeria team.”

A month later, United went to Libya where 45,000 watched them beat a Libya XI 2-0 with goals from Mark Hughes and Stapleton.

“As far as we knew, Colonel Gaddafi’s brother arranged it,” claims Stapleton. “He was big into football, though we never saw him.” The players were told that the security had been fixed by Colonel Gaddafi, whom the players also didn’t meet.

Stapleton tells us that there was initial concern as alcohol was banned, but nerves were calmed when it was found to be freely available very nice place hotel they stayed in.

There had been talk that United might impose their own drinks ban, even if an emergency bottle of whisky had been smuggled in the physio’s basket.

“No good to us, we drank beer,” laughs Stapleton.

“It was an astroturf pitch, a little bit hard. It was one of those games you had to play without any controversy or any stupid tackles so that nobody got injured. We were guests of the country and had to remember that.” United played friendly games in eight different countries in 1984 alone.

United would squeeze in mid-season friendlies, partly to earn money and partly to raise their profile. In December 1980, United played Home Park in Dublin in front of 12,000. A couple of months later they went to Belfast to play Linfield. Several players weren’t happy about playing in Belfast when tensions were running high during the troubles. They hadn’t been consulted and didn’t want to play the game – for which all 35,000 tickets at Windsor Park had been sold out. Dave Sexton persuaded his players to go on and the game passed without incident – and the club picked up £10,000 for their efforts.

The highest of jinks were left until the end of season trips, where the team would play a few games while combining them with a lads’ holiday.

These were saved for Israel rather than Africa in ‘84, according to Stapleton. In April, United visited Israel and played an Israeli select XI in Tel Aviv. They took in the Western Wall in Jerusalem and Bethlehem before the 1-1 draw.

Six players also took a dead giant turtle which had washed up on the beach in Tel Aviv and lifted the stinking, decomposing carcass through the hotel past astonished guests. It was carefully placed it in the bath of the physio Mick Brown. They put a cap on its head and one of Mick’s cigars in its mouth for good measure.

Mick was down in the bar with manager Ron Atkinson, who, as you might guess, was also a regular in Marbella throughout the ‘80s. The acrid stench began to permeate through the whole floor and was so bad the players decided they had to get it back out of the hotel since they too needed to sleep. Brown returned to his room and went straight to bed, none the wiser that any of this had happened since his nose had been broken and his sense of smell was poor.

Though the current lot will have some free time, the trip will be more sedate. Most of them barely drink and they’re aware that everyone brandishes a camera these days. That and United fans are in no mood to see them do anything but work bloody hard as they try to right a season which has often gone wrong so far.

COMMENT This Premier League winter break isn't about player welfare. So why do we have it?