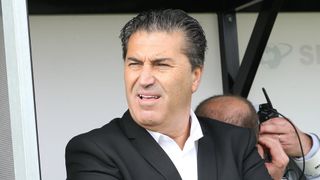 Jose Peseiro insists he is "not afraid" after being appointed head coach of Sporting CP for a second time, despite the turmoil that has engulfed the club in recent months.

Peseiro, who guided Sporting to the UEFA Cup final in 2005 during a 16-month spell as coach, replaces Sinisa Mihajlovic, who lasted just nine days at Estadio Jose Alvalade.

The Sporting squad was decimated at the end of the 2017-18 season when fans invaded the training ground and attacked players, many of whom terminated their contracts in the aftermath of the incident.

Despite the departures of Rui Patricio, William Carvalho, Gelson Martins and Bruno Fernandes from the squad and the poisonous atmosphere that has surrounded the club, Peseiro said he was ready to restore "a climate of serenity" at Sporting.

"I entered this room 13 years ago with great enthusiasm, a lot of motivation and a lot of responsibility to defend the colours of this club," Peseiro said at his presentation to the media.

"Although younger, I stated that, faced with resources that were clearly inferior to the direct competitors, we wanted to win the league and reach the cup final. It was only narrowly that we could not.

"Thirteen years later, I arrive with the same impression, the same motivation and the same responsibility. With more experience, of course, because the years have allowed me to reflect on what is most important [which] is to create a climate of serenity, stability and trust.

"It is too early to give an objective answer on the team, and it is very important to promote the club, which is full of great talents."

Sporting finished third in the Primeira Liga in 2017-18, missed out on qualification for the Champions League and lost the Portuguese Cup final, but Peseiro is not perturbed by the club's recent plight.

"Doubts will not disturb my work," he said. "I have heard about the difficulties and some friends ask me why I accept them.

"I'm not afraid. That is the main reason.

"But being at Sporting CP is a challenge for any coach in the world."