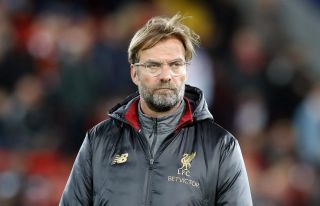 Liverpool manager Jurgen Klopp has stressed he does not view the Champions League last-16 tie against Bayern Munich as “a personal thing.”

The German was engaged in many a battle with Bayern during his tenure as Borussia Dortmund boss from 2008 to 2015, in which his side finished twice as Bundesliga champions and twice as runners-up behind the Bavarians.

Klopp’s Dortmund were also beaten by Bayern in the 2012/13 Champions League final.

Ahead of Bayern’s last-16 first-leg visit to Anfield on Tuesday, the 51-year-old was asked if his history against the club made the tie any more special.

And he said: “I don’t feel like this. Obviously a couple of people called me in the last few days to say in Germany it’s going mad because of this game, but that’s how it is.

“Making kind of these personal battles out of it I don’t understand.

“Yes, I was manager of Dortmund and had a bit of success there, but it was always difficult to play against Bayern. To beat them was the biggest challenge you could face in German football, always. And sometimes we did it and sometimes we didn’t, but that’s pretty much all.

“So I don’t see it like a personal thing for me.

“It is two big clubs facing each other and I am really happy to be part of this game. It’s a big one. It is a game you want to see.”

Klopp, whose Liverpool side were beaten by Real Madrid in last season’s Champions League final, added: “That’s maybe the biggest achievement so far for my team – that we are back not only in the competition but as well that people think we could win it. That’s good, but still, a lot of work to do.”

Last week, Bayern president Uli Hoeness was quoted by Suddeutsche Zeitung as saying of Klopp: “I had already arranged a co-operation with him many years ago, until we then signed Jurgen Klinsmann (in 2008).”

When asked about that on Monday, Klopp said: “The 2008 story was in the public years ago. And it is pretty much all the truth, apart from (the claim) that I was angry in the session afterwards, when they called me and said they had decided on the other Jurgen.

“I was not angry. I never expected that they would go for me. I was a second division manager (at Mainz) in Germany, and who would expect that Bayern calls you? It was more of a shock in the first moment. Then a couple of days later they called and said they went for the other Jurgen.

“All the rest is true. It was Uli Hoeness on the phone. So that’s not disrespectful.

“I would have never told it. It was not a story where you go around telling people ‘they asked me if I would go there.’

“But when Uli Hoeness spoke about it then it was clear, I can easily confirm that’s how it was.”

Bayern, who were eliminated by Real Madrid in the Champions League semis last term, have won the Bundesliga in each of the last six seasons. They are currently second, with Dortmund topping the table.

Klopp emphasised Bayern, managed by Niko Kovac since last summer, are “still a force”, before adding: “We don’t underestimate ourselves, we don’t think we are not good enough.

“We are proper competitive and that’s really cool. And in our stadium, with our people, we are a proper force, and we have to show that tomorrow night and make life as uncomfortable as possible for them.”