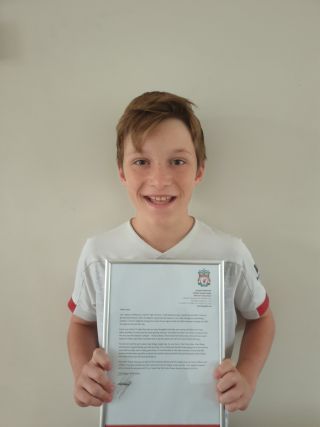 Jurgen Klopp’s heart-warming letter left an 11-year-old fan who had been worried about moving schools “completely blown away”, his mother said.

Lewis Balfe wrote to the Liverpool manager in August about the stress and anxiety he was feeling over starting a new school in September, with Klopp taking time out to send him some advice.

“He’s been a Liverpool fan since he got into football and being their manager he’s always really liked him, so I suppose that’s how it came about,” Milena Balfe told the PA news agency.

“He’s really excited and I was completely blown away, because I thought you might get a standard response from the club or you might get some acknowledgement, but I didn’t think you’d get a letter so personal.

“He was completely blown away by it. The first thing he did when he got it, he wanted me to take him to the shops so he could buy a frame for it, so it’s now in a frame so it can’t get damaged.”

Lewis sent the letter after speaking to a family friend, who advised him to write to Klopp to find out if he also got nervous, and Milena believes Klopp’s response could help her son.

“I think so. It’s difficult to know, he’s only had the letter a week,” she said.

When asked about the family’s reaction, she said: “I think his brother and sister have been really proud of him and can’t believe the response that we’ve been getting over the weekend and today, so they’re amazed and I think they’re a little bit jealous as well that he’s got such a reply.”

In his letter, Klopp wrote: “Can I start by telling you a secret? I get nervous.

“To be totally honest, I would be worried if I did not get nervous because when it happens it gives me the chance to turn that energy into something positive.

“I know it might be strange for a boy of your age to think that the Liverpool manager can feel the way that you do but I do.

“From your letter it is clear that you are very thoughtful and also very caring and when you have these qualities it is very hard to avoid getting nervous.

“You asked me what I do when my players feel this way and the answer is simple – I remind them of how important they are to me and how much I believe in them and I have no doubt that it will be exactly the same for your family with you.

“You do not need to worry about bad things happening. As you know, I lost more than a few finals and this isn’t a good feeling but with the help of my family and friends I kept going and in the end we were able to enjoy some really good times.

“If I had dwelled on the bad moments I know that this would not have been possible so please be positive about yourself and look forward to the brilliant time that I know you will have growing up.

“And don’t forget that you are part of the Liverpool family and this means that you have millions and millions of people just like you who want you to be happy as you can be.

“Your support means a lot to me and to everyone at LFC so I hope that this letter shows that we support you too.”