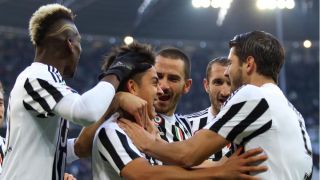 Juventus made an ominous start to 2016 as they stretched their Serie A winning run to eight matches with a comfortable 3-0 victory over struggling Verona.

After a faltering start to the season, Massimiliano Allegri's champions have surged up the table and this latest triumph will only serve to increase the pressure on early pacesetters Inter, Fiorentina and Napoli.

The hosts' second came courtesy of a powerful Leonardo Bonucci header before half-time, while Verona were restricted to a Giampaolo Pazzini effort that was kept out by Gianluigi Buffon.

Simone Zaza came off the bench to round off the scoring eight minutes from time, wrapping up the three points in convincing fashion.

Juve could probably have won by a bigger margin, but their bottom-placed visitors posed little threat throughout and Allegri's attentions will now turn to Sunday's trip to Sampdoria.

The home side started brightly and could have been ahead inside the opening three minutes as Stephan Lichtsteiner dragged just wide of the right-hand post from a Dybala cutback.

The full-back's participation looked to be in doubt when he went down holding his knee following a challenge from Samuel Souprayen, but the Swiss soon returned to the action and Dybala curled home a wonderful effort from the resulting free-kick.

The goal was just reward for an utterly dominant first eight minutes from the home side, but Pazzini almost netted a leveller out of the blue five minutes later with an improvised effort that forced Buffon into a diving save.

Paul Pogba pulled wide with a chance to make it 2-0 from 20 yards, before Alvaro Morata had a shot turned around the post by goalkeeper Pierluigi Gollini.

Juve remained in control and Claudio Marchisio tested Gollini with a low drive, while Souprayen produced a goal-saving interception to clear over the crossbar with Lichtsteiner and Morata ready to pounce in the six-yard box.

Having scored the opener, Dybala was on hand to provide the assist for Juve's second.

A whipped free-kick from the left was met with a bullet header by Bonucci that sailed beyond a flat-footed Gollini.

Alex Sandro skewed wide early in the second half, but Juve were happy to sit on their advantage and committed fewer men to attacking moves as the half progressed.

Pogba was denied a penalty when he went down softly in the box, before Buffon faced a rare threat to his goal as he expertly tipped over a looping Pazzini header that looked destined for the top corner.

But Zaza made absolutely certain of the win in the 82nd minute, slotting home after latching onto a wonderful throughball from Pogba.