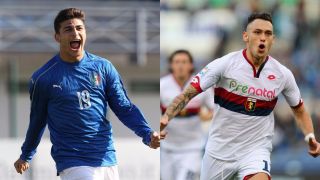 Serie A giants Juventus and AC Milan have each made late moves in the transfer window, respectively signing Riccardo Orsolini and Lucas Ocampos.

Italy Under-20 winger Orsolini has penned a four-and-a-half year contract with the champions after a deal worth up to €10million was agreed with Ascoli.

The 20-year-old will remain at Serie B side Ascoli on loan until the end of the season.

Juventus have already added Italy youth defender Mattia Caldara to their ranks as the five-time defending champions plan for their future.

Ocampos' move to San Siro is temporary, with Milan drafting in the winger on loan to cover for M'Baye Niang, who has joined Watford.