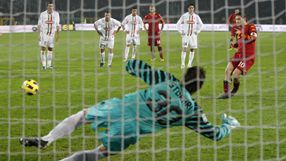 Roma coach Claudio Ranieri, facing the club who surprisingly sacked him two seasons ago, opted for Mirko Vucinic and Totti up front with Marco Borriello dropped to the bench but the partnership only worked in patches.

Iaquinta got the nod over Alessandro Del Piero to start for fourth-placed Juve and although he wasted a good early chance, the striker expertly converted former Roma midfielder Alberto Aquilani's assist after 35 minutes.

The duo will now hope to be recalled to the Italy squad on Sunday for Wednesday's friendly with Romania although a weary Iaquinta was substituted early in the second period.

Juve, with youth team defender Frederik Sorensen forced to play right-back and substitute Armand Traore making his debut at left-back, could not hang on to the lead and Totti equalised deep into first-half stoppage-time with a penalty.

Totti won the spot-kick when his own shot was clearly blocked by the hands of Simone Pepe.

Both sides could have won but Juve shaded the second half.

"We should have been more incisive and concrete," Ranieri told Sky TV. "It was two teams who wanted to win. In the first half maybe we had the chance to take charge but we didn't strike. Instead they scored with their first effort."

Roma, runners-up last season, have steadily climbed the table after a bad start and are now just four points off top spot with Juve three behind leaders AC Milan after 12 games.

Fiorentina earlier beat visitors Cesena 1-0 thanks to Alberto Gilardino's well-taken 59th minute goal but strike partner Adrian Mutu, who has only just returned from a drugs ban, limped off with a groin problem in the first half.

Sinisa Mihajlovic's side moved into the top half of the table for the first time this season while Cesena, who beat Lazio in midweek, stayed second bottom.