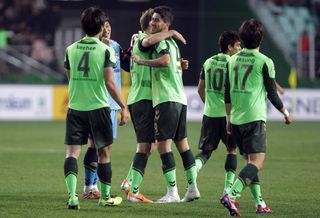 The league-leading Motors produced a fine performance to increase their advantage with victory over the second-placed defending champions, Lee Seung-ki and Lee Dong-gook hitting the target in a confident showing.

Choi Kang-hee's men were the only one of the top three to claim points, with Suwon Bluewings failing to cut the gap to Pohang with a 3-1 defeat at Jeonnam Dragons on Sunday.

The most impressive performers of the round were capital club Seoul, who hammered Incheon United 5-1 to further their hopes of a top-six place and a spot in the championship round.

There was good news for two of the sides struggling at the wrong end of the table as Gyeongnam and Busan I'Park both claimed victories.

Serbian defender Sreten Sretenovic scored twice as bottom club Gyeongnam won 3-1 at Sangju Sangmu, while midfielder Lim Sang-hyub netted a brace to help Busan leapfrog Seongnam to 10th in the table with a 4-2 away success against their fellow strugglers.