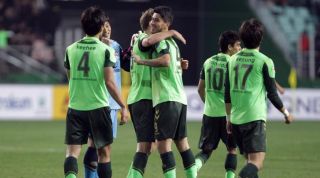 Jong Tae-se's 81st-minute effort appeared to have given hosts Suwon all three points after the visitors had cancelled out Kim Do-heon's third-minute opener through Kim Dong-sub.

But there was a final twist in the tale four minutes into stoppage time as Uzbekistani midfielder Server Djeparov netted to earn a share of the spoils for Seongnam.

Pohang Steelers' title defence looks to be all but over following a 3-0 defeat at fourth-placed Jeju United that leaves them 13 points adrift of Jeonbuk.

With just one round of fixtures left before the Korean top flight splits in two, Ulsan leapfrogged Jeonnam Dragons into the final top-six spot as a brace from attacker Yang Dong-hyun sealed a 2-1 victory over Sangju Sangmu.

Ulsan are now on 44 points, eight points behind Pohang in the prospective final AFC Champions League spot and ahead of Jeonnam on goal difference following their 2-1 home reverse to Seoul.

Kim Joo-young scored in the 58th minute and Colombian midfielder Mauricio Molina converted from the penalty spot to put the visitors in command, with Stevica Ristic's strike 10 minutes from time proving too late for Jeonnam.