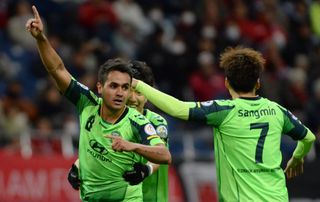 They are now level with Pohang, but have a game in hand, after they could only manage a goalless draw against seventh-placed Busan I'Park..

Seoul's title hopes were dealt a blow as they slipped to a 2-0 defeat at Suwon Bluewings.

Brazilian striker Natanel Santos Junior opened the scoring for Suwon after 56 minutes before Jong Tae-Se's effort 10 minutes from time made sure of the victory.

Bottom side Daejeon Citzen's hopes of staying in the division were dealt another blow as they were beaten 1-0 by Gyeongnam in the relegation group, defender Yoon Sin-Young the match-winner for the visitors after he found the net in the closing stages of the first half.

Gangwon occupy the other relegation place following their 1-1 draw with Jeju United.

Foward Maranhao's last-minute goal denied Gangwon victory, the visitors left to settle for a point after defender Lee Yong's 69th minute own goal had put them in front.

However, Daegu are now two points clear of the drop thanks to a 2-1 success at Chunnam Dragons.

Midfielder Hwang Soon-Min put Daegu in front after 10 minutes, only for defender Kim Tae-Ho to level things up.

Still, Daegu were not to be denied as Hwang completed double with 13 minutes to go.