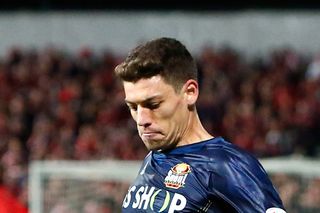 Seoul leapfrogged Pohang Steelers into third in the K-League championship round standings, securing a berth in the 2015-16, after they came from behind to defeat Jeju United 2-1, while the Steelers lost by the same score at home to Suwon Bluewings.

With 40 minutes of football to play at both Jeju World Cup Stadium in Seogwipo and the Steelyard in Pohang, the Steelers looked set to claim South Korea's fourth qualification berth in next season's ACL as they led Suwon 1-0, while Jeju were also 1-0 ahead of Seoul.

But after Seoul equalised in the 69th minute through Yun Il-Lok, Pohang conceded twice in the space of five minutes with Santos Junior and Jong Tae-Se scoring for Suwon.

Santos Junior showed fine skill to bring down a long ball on the run and then blast the ball through the goalkeeper's legs in the 79th minute, while Jong converted a header in the 84th.

Pohang almost scored what would have been a crucial equaliser only minutes later but Moon Chang-Jin's chip struck the post and then rolled back along the goal-line without trickling over before Suwon's goalkeeper pounced on the ball.

Seoul still needed one more goal, however, to rise into third in the championship round table, and they would leave it until the final minute to score, with Spanish utility Osmar Barba striking the winner for the capital club.

Those two results saw Seoul move to 58 points with plus 14 goal difference, just ahead of Pohang (58, plus 11).

Suwon remained second with 67 points, while Jeonbuk Motors (81), who had already secured the title, drew 1-1 with Ulsan in the other match.