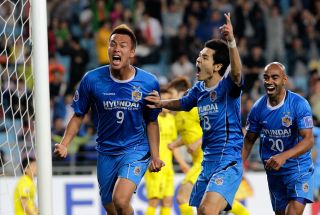 Striker Kim Shin-Wook proved to be the hero as he netted the only goal of the game five minutes into the second half to ensure maximum points for the hosts.

Ulsan remain five points ahead of nearest challengers Pohang Steelers, who came from a goal down to beat Incheon United 2-1.

The visitors took the lead early in the second half through midfielder Moon Sang-Yun, but goals from attacker Ko Mu-Yeol and midfieler Shing Young-Jun turned things around for Pohang.

Meanwhile, Jeonbuk Motors are level on points with second-placed Pohang following their 3-2 victory over Busan I'Park.

Park Hee-Do scored the winner midway through the second half after earlier strikes from Jung Hyuk and Kim Shin-Young had been cancelled out by Busan's Han Ji-Ho and Yang Dong-Hyun.

Attacker Kim Young-Hoo put Gangwon in front from the penalty spot just before the half-hour mark, but defender Park Jin-Po levelled things up.

However midfielder Kim Cheol-Ho was sent off for the hosts eight minutes from time, and the visitors took full advantage as striker Choi Jin-Ho found the net with three minutes to play.