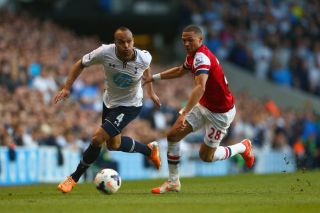 The Frenchman is out of contract at White Hart Lane at the end of the season and has yet to sign a new deal with Tim Sherwood's men.

And reports have suggested that Kaboul is to follow in the footsteps of Sol Campbell, who left Tottenham for Arsenal in 2001, going on to win two Premier League titles and three FA Cups under Arsene Wenger.

But Kaboul has categorically rejected claims that he will repeat Campbell's controversial switch.

He posted on his Twitter account: "I can confirm 100% that the rumour about me joining Arsenal is not true!!! #coys"

Kaboul initially joined Tottenham in 2007, leaving for Portsmouth in 2008 only to return to White Hart Lane in 2010.

He has made 15 appearances for Tottenham this season, with his only goal coming at the wrong end as he put through his own net in last Sunday's 4-0 loss at Liverpool.