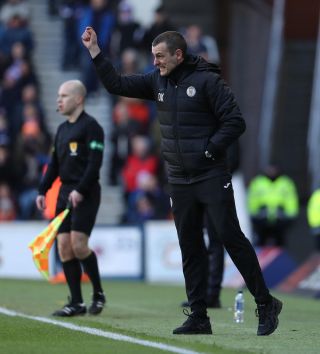 Oran Kearney insists there was no euphoria in the St Mirren dressing room after his side battled from behind to beat Dundee 2-1 and leapfrog the Taysiders at the bottom of the Ladbrokes Premiership.

Sunderland loanee Ethan Robson swept in his first goal for Dundee within a minute of the kick-off at the Simple Digital Arena but that was cancelled out in the 12th minute by Danny Mullen .

Midfielder Brad Lyons, on loan from Blackburn,  then headed in his first St Mirren goal in the 58th minute to take the Paisley side two points clear of Dundee and into the relegation play-off spot with seven fixtures remaining.

Kearney said: “It was nice for the fans first and foremost to get the joyous feeling that they got at the end of the game that they didn’t get on Wednesday night (1-0 defeat at St Johnstone).

“It was great for them  but the dressing room is pretty much the same.

“We are hoping it is a springboard and it will give us that catalyst to kick on but it was only three points and there was no  high fives, back slapping or big celebrations in the dressing room.

“We have got three points and off the bottom of the table but we know the work that lies ahead.”

Lyons was delighted to get his first goal for the Buddies.

The Northern Irishman said: “I loved that one. It was about time I got on the scoresheet.

“I always try to get a few goals, that’s what has been lacking in my game and thankfully I was in the right position to get the goal for the three points.

“We need to keep going and working hard and see where it takes us.”

Dundee, backed by around 1,600 fans in Paisley, have now lost their last five matches and boss Jim McIntyre was despondent about his side’s lack of reaction to the loss of the second goal.

He said: “It was a major disappointment.

“Obviously we started the game well, the way we wanted to and I thought we were causing them real bother in the  opening 15/20 minutes.

“We lost a goal probably against the run of play but the most disappointing thing for me was the reaction after we lost the second goal.

“That’s where we have to stand up and be counted and we didn’t.

“It gave St Mirren belief and desire. They won more headers after that, got on to second balls more and that is the first time I have seen that.

“The reaction to going behind in other games has been really good but that was the first time I had seen that side of us and I didn’t like it and they are well aware of that.

“We had a brilliant away support today and we let them down in terms of the reaction.”