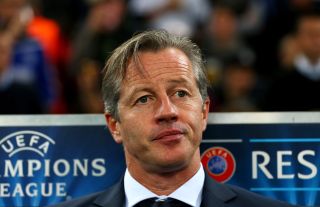 Schalke slumped to their first defeat of the group stage after two goals to Fernando Torres and a late Eden Hazard strike handed Chelsea a vital three points in Group E.

Despite the manner of the defeat, Keller felt the scoreline flattered Chelsea and believes his side paid the price for failing to make the most of several scoring chances.

"Well I think 3-0 sounds really distinct, but I don't think that's how the match was and not how we presented ourselves," he said.

"What I am unbelievably upset about is the fact that they scored a goal after a set-piece in the fifth minute, but the team reacted and didn't stop to play football so I can't criticise them.

"They showed morale, they wanted to score a goal and when you have three or four good chances against a team like Chelsea, then you have to score.

After Torres put the visitors in front early on, Schalke enjoyed periods of dominance but failed to make the decisive breakthrough.

The Germans were eventually punished for their wastefulness with Torres completing his brace midway through the second half before Hazard finished things off three minutes from time.

"In the second half we all tried to make it better but received counter-attacks caused by individual faults," Keller said.

"So I think 3-0 sounds unfair, it's not representing the match how it happened.

"But that is where you saw the quality of Chelsea - they made sure they profited from every one of our mistakes."