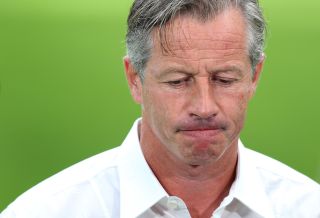 The 42-year-old watched his Schalke side concede four times in 37 second-half minutes on Saturday, with Robin Knoche breaking the deadlock. The young defender got on the end of a header into the box from Ivan Perisic to score after 54 minutes.

Vieirinha and Naldo got in on the act before Stefan Kutschke completed the scoring by marking his debut with a goal, sending the ball through Timo Hildebrand's legs to add insult to injury.

After battling hard to earn a point from a 3-3 draw with Hamburg in their Bundesliga opener, Keller insists he will not be able to forget the Wolfsburg thrashing and is ready to make sure it does not happen again.

"I don't want to get it out of their heads right now (the reason for the poor performance). We have to work through it. That's important. We will analyse the mistakes we made," he insisted.

"We have league and cup weeks in front of us. It's not like I am punishing them. They understand it."

Schalke will now aim to bounce back when they face PAOK Salonika in the UEFA Champions League play-off round on Wednesday, after their original opponents Metalist Kharkiv were banned following a match-fixing inquiry.