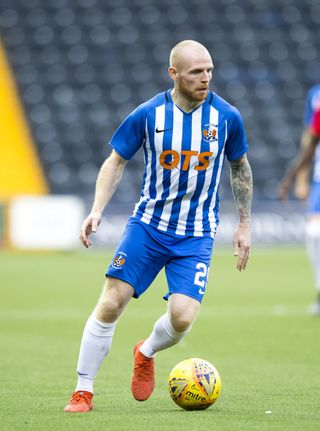 Former Scotland international Burke opened his goalscoring account for the campaign with a double in Kilmarnock’s 3-0 win over Hearts last weekend.

Dyer believes the 35-year-old is the perfect role model for the younger players in Angelo Alessio’s squad as Killie gear up for their trip to Easter Road to face Hibernian in the Ladbrokes Premiership.

Dyer said: “Burkey impresses every week. He trains like he’s 18 or 19, he looks after his body, he’s a good professional and good around the changing room with the young lads.

“He’s a model professional and I’m glad he is on our side. He’s a good role model. Round the changing room he is brilliant, he sets the standards every day and all the young boys follow that. He’s a joy to work with.”

Kilmarnock’s encounter with Hibs kicks off a run of seven games before the winter break and Dyer knows this is a crucial period as they strive to secure top-six football for the third campaign in succession.

He said:  “We’ve got enough players to cope with the demands, all the lads know now what it’s about and they know it’s a period where they have to look after their bodies.

“It’s a difficult period because it’s Christmas and everyone is out and you want to be with your family and kids and you might eat a little bit more but that’s where you have to be professional and come in and train well and do the right things.”

Fifth-placed Kilmarnock can open a six-point lead over Hibs but Dyer knows they will be a difficult proposition after winning three games in a row, two since the arrival of Jack Ross.

Dyer said: “It’s different because a new manager has come in and everyone wants to impress but every time you go to Hibs it’s always going to be a hard game. It’s a big club, a great ground and good support, so we know it’s going to be a tough game.

“We’ve got enough experience in our changing room to handle that and we’re raring to go.

“Jack had a good career at St Mirren and then he went to Sunderland, where I thought he did a good job and was unlucky to be sacked. He’s now got a good job at Hibs, it’s a great club and I’m sure he is going to do great things there but hopefully not Saturday.”