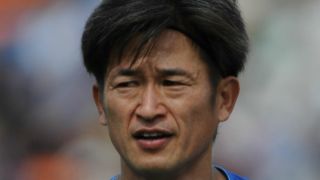 Former Japan international Kazuyoshi Miura has continued to prove that age is no barrier to a professional football career by signing a new contract with Yokohama FC aged 50.

Miura, who broke Stanley Matthews' record as the oldest professional to score a goal last year, retired from international football 18 years ago with 89 caps, but is now set to play his 33rd season domestically.

The veteran forward started his career with Santos and spent several years in Brazil before returning to his homeland in 1990 and seeing off the likes of Gary Lineker and Zico to be named MVP in the inaugural J.League season three years later.

Miura was also named Asian Player of the Year in 1993 but was controversially left out of Japan's 1998 World Cup squad, despite scoring 14 goals as the country qualified for the first time.