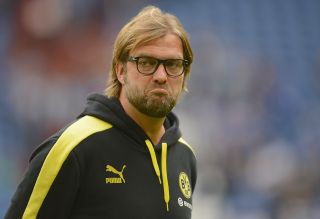 The two sides were unable to get Saturday's Bundesliga match at the Veltins-Arena under way for 10 minutes as sections of the Dortmund support appeared to throw flares onto the pitch and into the nearby home fans.

When the game did commence, Pierre-Emerick Aubameyang opened the scoring for Dortmund as he converted a neat team goal, with Nuri Sahin and Jakub Blaszczykowski completing the victory after Max Meyer had pulled one back for Schalke with the score at 2-0.

Klopp admitted he was happy with the victory over their fierce rivals, but revealed he felt ashamed by the fans' behaviour.

"We win 3-1 and I still have to deal and talk about the action before the game," he said. "These are unsightly images.

"At this moment, we are ashamed. I am often proud of our fans, but these were, in the truest sense of the word harassing. It must be sanctioned."

The win sees Dortmund remain in second place in the Bundesliga, one point behind Bayern Munich after 10 matches.