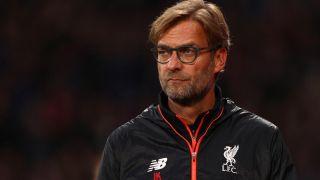 Liverpool manager Jurgen Klopp called for Steven Gerrard to be given space in his bid to move into coaching.

Gerrard, 36, confirmed his retirement from professional football on Thursday, having announced he was leaving LA Galaxy earlier this month.

Klopp wants Gerrard to be given his chance to settle into management, comparing the situation to what Ryan Giggs went through at Manchester United.

"In Manchester it is the same with Giggs. Where will he go next? But if you want these guys on the bench let them work and don't handle them as the players they were before," he told UK newspapers.

"That is a little advice from a very average football player."

While it is expected Gerrard will return to Liverpool in some capacity, Klopp wants the former midfielder out of the spotlight.

The German said his situation in charge of Mainz, where he started as coach in 2001, was far different.

"In the first few years at Mainz if I was training naked no-one would have seen it. I didn't do that actually," Klopp said.

"When people accept you will make mistakes it helps of course. The best thing was we could learn everything from doing things right and wrong.

"You have your first game, make the wrong decision, then you develop and it's about collecting points, then to stay in the league, then to win the league or whatever.

"It was not that every day everyone wanted to know, 'how are you?' Most of the time we had no-one around and we had to fight for a little bit of pubic interest, especially in Mainz."