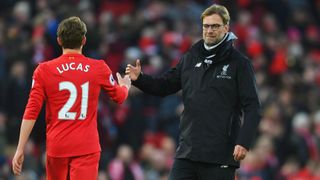 Jurgen Klopp has started something special at Liverpool in his first 18 months at the helm, according to midfielder Lucas Leiva.

Liverpool are hoping to seal Champions League qualification over their last four matches of the season, starting with Monday's away game against Watford.

A tight race for a top-four berth has the third-placed Reds level on points with Manchester City and one clear of Manchester United. Arsenal are six behind them, but have a game in hand.

Lucas has been hugely impressed with Klopp's impact and feels Champions League football would represent a solid return from the German's first full season in charge.

"There is something special [going on at the club] I would say," Lucas said to Sky Sports.

"The group of players we have and the manager knows what it takes to win. We have seen how much we have improved in the last 18 months as a team and as a club.

"Everyone is a lot more positive because he arrived here and gave us that extra energy.

"My relationship with him is fantastic. He's a guy I have learned a lot from on the pitch and off.

"He also knows how I am when I'm not playing so much, but there are never any problems."

10 great contenders.Only one Goal of the Season winner.Make your choice: May 1, 2017

Lucas faces an uncertain Liverpool future given he has only started 10 Premier League matches this season, the lowest tally of his decade at the club.

"If you relax when you are not playing then I think something is wrong, that is just my personality," added Lucas.

"But I know he is the manager and he makes decisions for the team, it's not just about one player. So I have to keep working to get more chances.

"Now we just focus on the final four games and try to finish in the top four, which will be a good achievement for this year, then I will sit down and talk [with the club] to see what is best."