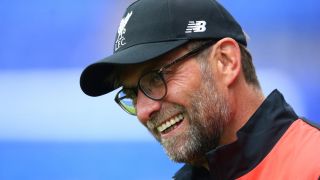 Liverpool manager Jurgen Klopp insists there is no need for him to sign "big names" ahead of the Premier League season.

The German has added Sadio Mane, Joel Matip and Loris Karius to his squad for the upcoming campaign, with further additions expected.

Klopp said he had no plans to go for players based on their status, focusing instead on what was best for his side as a whole.

"If we go for players and there is obviously no chance, there is no point," he said.

"Look for players you can have and make the best of it. I am 100 per cent happy with the guys we have brought in until now.

"This period in every year is one of a lot of expectations. Everyone expects big names and a big improvement because of big names and if you don't know the players it's like 'What are we doing? What are they doing?'"

Manchester United have added the likes of Zlatan Ibrahimovic and Henrikh Mkhitaryan, while City brought in Ilkay Gundogan among others.

However, Klopp's focus is on building a squad, saying: "Nobody thinks about the good games we played last season.

"They only think United or City have taken this player and we have taken what's-his-name, but for us it is about creating and building a team for next year.

"We have to prove that our thinking about the team is right."