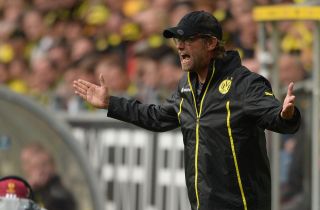 Dortmund beat Eintracht Braunschweig 2-1 in the Bundesliga on Sunday thanks to goals from Jonas Hofmann and Marco Reus.

Klopp admitted he had been fearful about how fatigued his players would be after their midweek exertions, but he was thrilled with their response.

"We absolutely deserved to win but then, that's what we expected. I'm happy with the way my team played," he explained.

"I didn't expect them, after the break with the national team where we were spread out all around the world, to play and bring the stars down from the sky.

"We had anticipated hard work and that's what we did so I'm happy with that."

Klopp was also impressed with Hofmann's impact after the 21-year-old scored the opener and caused problems when his run led to him being fouled for Reus' penalty.

"To be able to put Hoffi in as a substitute with his freshness and him playing with little pressure, knowing how to use his ability and spread happiness. Well, that's a beautiful story," he continued.

For Braunschweig, it was a case of fine margins in defeat again, after they lost their Bundesliga opener 1-0 at home to Werder Bremen.

However, Klopp had positive words for Sunday's opponents - praising their attitude and work rate.

"What I found remarkable is that Braunschweig managed to keep this up for 90 minutes.

"I've rarely seen that that, a team that stays so organised so ready for the tight situations."