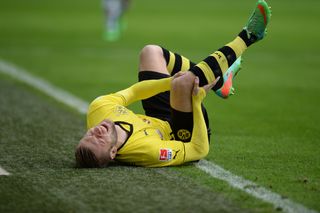 The midfielder collapsed early on in the Bundesliga clash on Saturday, and was taken from the pitch on a stretcher with suspected cruciate knee ligament damage.

Klopp offered no news on the severity of the midfielder's injury, but remained positive it would not be as bad as first feared.

"This is of course bad news," he said. "We do not yet know for sure. The cruciate ligament (damage) is only a suspicion, so I still have a little hope, even if all the signs suggests it is.

"Should it prove to be true, it is an awful message."

Dortmund went on to take the lead through Sven Bender, only for the same player to level the scores with an own goal.

Nuri Sahin looked to have sealed all three points for Klopp's men with a stunning free-kick, but Ji Dong-Won, who will play for Dortmund next season, levelled to force a draw.

Dortmund move up to third, but Klopp rued his side's failure to make up further ground on second-placed Bayer Leverkusen, who lost to Freiburg.

"We set ourselves big goals for the second half (of the season)," he added. "The opposition has played a very physical game. We were in involved many battles; there were a lot of tactical fouls.

"Overall, we did not have enough clear moments. Augsburg has of course also done well.

"We wanted to put a signal (out to the league) but we have not done (that). We can play better, no question."