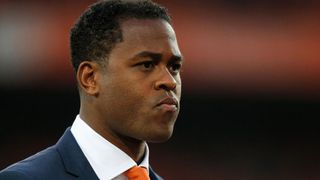 Former Netherlands international striker Patrick Kluivert has been appointed as director of football at Paris Saint-Germain, the Ligue 1 champions have confirmed.

The 40-year-old was assistant manager under Louis van Gaal when Netherlands reached the semi-finals of the 2014 World Cup.

In May, Kluivert signed a two-year deal as a youth coach at former club Ajax, where the ex-Barcelona and AC Milan man was set to oversee the under-19 side, but he has jumped at the chance to join PSG.

"I am extremely honoured to join such a great club as Paris Saint-Germain and to take on the role of director of football," Kluivert told his new side's official website.

"I will conduct my mission with great ambition and rigor. We are all in Paris to reach the very high objectives set by the club and meet the expectations of the players and supporters alike.

"As I am moving to Paris, I would also like to express my gratitude to Ajax Amsterdam, the club thanks to which I discovered top-level football and which has always given me their trust."

PSG president Nasser Al-Khelaifi has also tasked Kluivert with fulfilling ambassadorial duties for the club on a national and worldwide basis.

Al-Khelaifi said: "I want to thank Ajax for having allowed the opportunity to Patrick come to PSG.

"Patrick was a great player admired around the world and after his career always wanted to continue to live football every day.

"I am confident that his expertise, football and his passion for the game will help the club to continue its march forward, particularly internationally.

"After the appointment of our new coach and the choice of our future performance centre, the arrival of Patrick Kluivert is another strong sign of our commitment to open a new cycle."