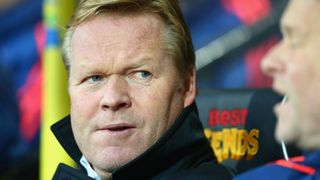 Southampton manager Ronald Koeman has taken aim at the club's academy after being unimpressed at a recent under-21s fixture.

The Dutchman has been forced to sell some of his biggest stars in recent seasons, and could be set for another difficult off-season with the likes of Sadio Mane and Victor Wanyama rumoured to be on their way out.

Southampton have produced the likes of Gareth Bale, Theo Walcott and Adam Lallana in recent times, and Koeman has expressed concerns over the next crop of young players coming through.

The 52-year-old has publicly said Southampton need to be ambitious to keep him on board at the end of the season, but a recent under-21s fixture did not help their cause.

"I wasn’t impressed," Koeman said. "I look to the development of young players and they still have a lot to learn and they are still not on the level that is needed for the Premier League.

"It is more difficult to get into the first team of Southampton than it was four years ago.

"For some of them it is a long way, maybe too long. Only Matt Targett is ready for the first team. Harry Reed is also close, but the rest not so much."