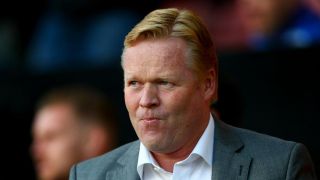 Southampton manager Ronald Koeman is confident that his side will progress to the UEFA Europa League qualifying play-offs after their 3-0 win over Vitesse in the third round first leg.

Goals from Graziano Pelle, Dusan Tadic and Shane Long ensured Southampton take a comfortable lead into the second leg, but Koeman was critical of his players for giving Vitesse chances to get back in the tie.

The Dutch manager said: "In European football, 3-0 is a great result.

"We controlled the game, but we played backwards too much, and they had a big chance to make it 2-1.

"The third goal made a big difference and I'm happy about the final result."

Southampton captain Jose Fonte agreed with Koeman and claimed the home side relaxed after Pelle and Tadic had given them a 2-0 lead at the break.

"We dropped the tempo and we're not happy about it," Fonte said.

"If we allow them to gain confidence it can be dangerous, like it was on a couple of occasions.

"We're going to face tougher opposition and we need to prepare much better."
Koeman admitted his squad would benefit from more new players as he prepares for the challenge of possibly having to balance the Premier League campaign with a schedule of Europa League fixtures.

"We try to have a good squad. We have to handle the games on Thursday and Sunday, and I believe we can handle that," he said.

"In an ideal world, we need two more players to have a perfect squad for this season. They put all the names in the press, but I don't talk about names and possibilities."
Vitesse coach Peter Bosz, whose team had an average age of 22 on the night, lamented a lack of experience and a number of missed chances to get back in the game.

"We had some decent chances and we didn't score at the right moment," he said.

"At the top it's about details, and today the details were not in our favour. It's maybe because of a lack of experience."