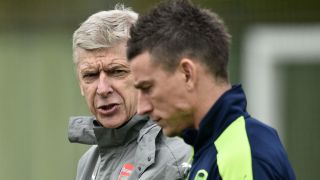 Arsene Wenger has transformed players into men during his admirable 20 years at Arsenal, according to defender Laurent Koscielny.

The 67-year-old is the longest-serving manager in England's top flight by some distance but his future remains the subject of speculation, with his contract expiring at the end of the season.

A number of Arsenal stars have urged him to stay, with Mesut Ozil claiming his own future will be tied to that of the Frenchman and Olivier Giroud having stated that "everyone" at Emirates Stadium wants Wenger to continue.

Koscielny is the latest to praise Wenger's legacy at the Gunners and says he has "built men" during his two decades at the club.

"You may say that we haven't won the title for a long time, but he has not just built players, he's built men too," Koscielny told Arsenal Player.

"Every player who has played for Arsenal has grown here and has become a man. It's a big number [of players]. For me and the others, it's a good opportunity to be with him and learn from him.

"He's passionate about football. He loves football and he loves to watch his team play well with the ball. That's why he's here again after 20 years.

"Along with a lot of people, he's helped this club grow with a new stadium, a new training ground, and he built the platform for us to compete for the Premier League and Champions League every year."