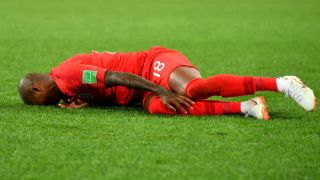 Emil Krafth has warned Sweden to be careful around England wing-back Ashley Young in the penalty area during Saturday's World Cup quarter-final – the latest question against the integrity of Gareth Southgate's side.

England moved into the last eight with a penalty shoot-out triumph over Colombia and three of their goals in regulation time at Russia 2018 have come from the spot.

Harry Kane's sixth strike of the tournament came from 12 yards against Colombia and after the match their veteran boss Jose Pekerman said: "There were lots of penalty incidents [in England's games] with Panama and Tunisia. Players fall in the box, they collide and fall."

Young has previously found himself under the microscope for simulation during his career and defender Krafth seemingly tried to turn up the pressure ahead of Sweden and England's Samara showdown.

"I know him well," Krafth told reporters. "I am a Manchester United supporter and I have seen him a lot.

"He is a good player, very fast, who likes to cut inside. We must do not do anything stupid with him inside the box."

He added: "I think it's an advantage for us that their game went all the way to a penalty shoot-out. Now we know which England players will take the penalties and also where they will shoot.

"They also had to play 30 minutes more than us, and get less time between the games."

"They think they are so good but they are not," the 1994 World Cup semi-finalist told Sveriges Radio. "[The England team] is spoilt young people who make a ton of money.

"The English are easy to score against. You don't get afraid when you see this team. It suits Sweden well. They do not have the total desperation required.

"England have just played a long, tough game with extra time and I also think they have a little bit of hubris.

"They think they are going to win and they will get an unpleasant surprise on Saturday."