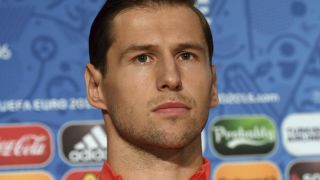 Grzegorz Krychowiak is set to join Paris Saint-Germain from Sevilla after the clubs agreed a deal for the Poland international.

The 26-year-old arrived at the Ramon Sanchez Pizjuan from Reims in 2014 and has made 90 appearances for the Liga outfit, helping them to two Europa League titles.

Midfielder Krychowiak caught the eye as Poland reached the Euro 2016 quarter-finals in France and scored the winning penalty in the last-16 victory over Switzerland.

PSG are yet to confirm the deal, but Krychowiak posted a picture on Twitter of him holding a shirt with "Krychowiak 2021" printed on the back, suggesting he will sign a five-year contract.

A Sevilla statement read: "Sevilla FC appreciates his outstanding commitment during the two seasons he has played for the team and we wish him all the best in his new career."