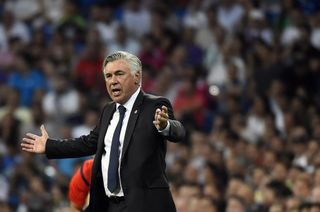 With limited time remaining in the transfer window, Santiago Bernabeu bosses allowed Di Maria to leave for Manchester United and Alonso for Bayern Munich in midweek.

The pair had formed a key part of Real's successes in recent seasons, but coach Carlo Ancelotti still boasts a wealth of options at his disposal.

Ancelotti's men opened the league season with a 2-0 win over Cordoba on Monday courtesy of goals from Karim Benzema and Cristiano Ronaldo.

However, the hosts were far from their fluent best and were forced to stand firm amid plenty of pressure from the visitors after the break.

The European champions will be hopeful of finding their attacking rhythm at the Anoeta - a place they have not lost at since the 2003-04 campaign.

Sociedad have struggled against Ancelotti's side recently, with Madrid putting nine goals past them last term.

Furthermore, the hosts go into the fixture off the back of a UEFA Europa League exit - Jagoba Arrasate's side suffering a 3-1 aggregate defeat to Russian outfit Krasnodar.

Toni Kroos, who made his league debut for Real on Monday and will be expected to help fill the void left by Alonso, expects a difficult test when they visit the Basque Country.

"I felt very comfortable on the pitch [against Cordoba]," the German said.

"The visit to Real Sociedad will be difficult but we will go all out for victory in the Anoeta.

"We will have a big battle in the Anoeta against Real Sociedad. It will be tough."

In a week where Madrid learnt their Champions League group opponents, Arrasate's men surrendered a one-goal lead to bow out of Europe courtesy of a horror show late on at the Kuban Stadium.

Three goals in the final 19 minutes ended Sociedad's hopes of progressing to the group stages, but Arrasate hopes to see a reaction from his charges when Madrid come to town.

"The result gives us a lot of sadness and anger. It’s a hard blow but it will make us stronger," Marca quotes him as saying.

Sociedad have no fresh injury concerns although they could still be without Alfred Finnbogason, Ion Ansotegi and Jon Gaztanaga.

Carlos Vela may make his full return, having come off the bench against Krasnodar on Thursday.