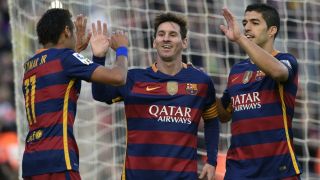 Karim Benzema opened the scoring for the home side before Gareth Bale's header made it 2-0 in front of a noisy Santiago Bernabeu crowd.

Bale's slick side-footed finish extended the advantage and the Wales star completed his hat-trick with another header before Benzema blasted home a late fifth, as Madrid started their post-Rafael Benitez era in perfect style.

Barcelona moved back to the top of La Liga earlier in the day thanks to a 4-0 win over Granada, which was inspired by Lionel Messi.

Messi stabbed his third high into the net in the second half before Neymar fired in a fourth, as Barca moved a point clear of Atletico Madrid ahead of their trip to face Celta Vigo on Sunday.

Levante won the battle of the bottom as Jose Luis Morales struck the crucial second goal in a 2-1 victory over Rayo Vallecano.

Substitute Deyverson fired in Tono's cross after 72 minutes and Morales buried a second in the far corner nine minutes later to put the home side in the driving seat.

Pablo Hernandez fired in a smart finish from close range barely 90 seconds later to set up a tense finish in Valencia, but Levante held on to end a run of four defeats on the spin and move to within a point of second-from-bottom Rayo.

Sevilla climbed above Athletic Bilbao into seventh place as they claimed a hard-fought 2-0 win over Ernesto Valverde's side at the Ramon Sanchez Pizjuan.

The Europa League holders had lost just once in 18 home league games with Athletic prior to the encounter and Kevin Gameiro drilled home Vitolo's pass to put them ahead after 24 minutes.

Athletic were then punished for some wayward finishing when Gameiro doubled his tally from the penalty spot midway through the second half after Aymeric Laporte brought down Grzegorz Krychowiak, allowing Sevilla to close on the European places.

Betis have now lost their last four matches without scoring after Getafe won 1-0 at the Coliseum Alfonso Perez.