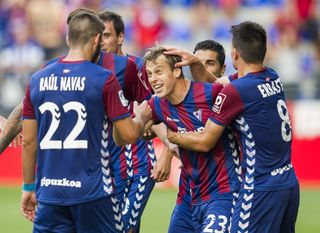 Basque club Eibar clinched the Segunda Division title last season to secure back-to-back promotions and they were in danger of having their place in the top flight taken away from them before even appearing in La Liga.

However, after raising the necessary funds demanded by the Spanish authorities, La Liga football arrived in the little town on Sunday and their supporters went home elated.

Real Sociedad unsurprisingly controlled possession for much of the match, but they were far less clinical than their Basque rivals.

Javi Lara netted the game's only goal on the stroke of half-time, striking with an incredible free-kick from a difficult angle and seeing his effort go in off the post.

Second-half substitute Carlos Vela spurned a couple of chances after the break and Diego Martinez went close late on, but Eibar held on to claim their maiden La Liga victory.

Former Roma and Celta Vigo coach Luis Enrique returned during the close-season to the club where he spent eight years of his playing career and witnessed Lionel Messi net a double in a straightforward 3-0 win over Elche at Camp Nou.

Yet, the first goal was familiar as Messi stroked into the bottom-right corner after a clever turn on the edge of the box.

A straight red card for Javier Mascherano just before the break appeared to give Elche a chance, but 18-year-old debutant Munir came up with an immediate response with a delightful improvised strike just after half-time.

Messi effectively wrapped up the win after the hour-mark, netting with another controlled effort after evading a couple of defenders  to give Luis Enrique the ideal return to Camp Nou.

Luis Enrique's old side Celta were in action at the same time and they began their new era under coach Eduardo Berizzo with a 3-1 triumph over visitors Getafe.

Nolito broke the deadlock in the 20th minute as he squeezed a shot under Vicente Guaita and debutant Fabian Orellana doubled the advantage with an excellent solo effort with 56 minutes gone.

Sammir pulled one back just after the hour-mark, tapping in after a good run by Angel Lafita, but Joaquin Larrivey completed the win for Celta soon after with a poked finish in his first appearance for the club.

Villarreal also started the season with a win as Ikechukwu Uche and Denis Cheryshev scored second-half goals in a 2-0 win at Levante.