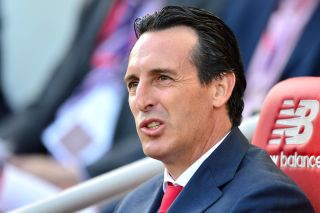 Arsenal will be without forward Alexandre Lacazette until October due to injury, but boss Unai Emery is more than happy to keep giving opportunities to the younger members of his squad.

Midfielder Joe Willock signed a new long-term contract with the Premier League club on Wednesday and he is one of many academy graduates to have featured under the Spaniard since he took charge last summer.

Forward Reiss Nelson, 19, is another to have earned a shot in the starting XI this season and Lacazette’s ankle injury – revealed by the club after Emery’s press conference – should present Nelson with more chances, starting with Sunday’s clash at Watford.

“It’s our philosophy and our idea to give them chances to be with us in training and taking confidence and playing minutes and if they achieve the performance we want, then continuing,” Emery said, when asked about his young players.

"It's no exaggeration to say that my dad gave me that type of work rate. He's a big part of who I am today, and is the reason why me and my brothers have got to where we are today."— Arsenal (@Arsenal) September 12, 2019

“They can take experience being with us, training with us, playing with us and also helping them with our experienced players and sharing with those players our way.”

He added: “Every player needs their first experience. For me it’s training with us every day, giving them chances to show us first their spirit, then their wish and after their performance.

Emery confirmed club-record signing Nicolas Pepe should be available for the fixture at Vicarage Road, despite not going away with Ivory Coast on international duty.

The goalscoring onus will fall on the former Lille attacker and Real Madrid loanee Dani Cellebos – plus Pierre-Emerick Aubameyang – with Lacazette sidelined until October.

On Pepe, Emery said: “We decided to keep him here with us and we were working with him to have him ready for Sunday and we think he will be.

“We need people to be patient with him and also help him to be comfortable, to know us, to know the opposition teams.

“Each training and each match is very important to be ready and to achieve their (Pepe and Cellebos) performance. I really think the progress is perfect.”

Arsenal are likely to come up against ex-player Danny Welbeck on Sunday, who joined Watford in August on a free transfer after five seasons at the Emirates.

He was one of Javi Gracia’s final signings at Vicarage Road before he was sacked last weekend following a poor run of form and replaced by Quique Sanchez Flores.

Emery added: “Danny’s an amazing person and a very good player. He had that injury and he finished here and now he is at Watford and I wish him the best.”

Welbeck was one of 10 first-teamers to leave Arsenal permanently this summer, although defender Shkodran Mustafi did not depart.

He was expected to leave before the European transfer window shut on September 2, but decided to stay with the Gunners and Emery insists he is now firmly part of his plans moving forward.

“Some players left and we didn’t decide that option at the beginning. When they left it was because we decided we can continue in our way with different options. Mustafi decided to be here and when he decided to be here he’s like another player,” Emery said.

“I respect his decision. When he decided I spoke to him and said ‘you’re one more in the squad, I’m going to work with you as other players’.

“Since he decided to stay here he’s working every day with a big motivation and good spirit.”