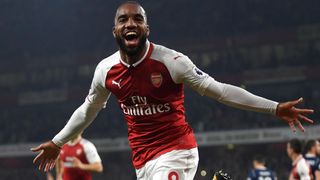 Lacazette struck a brace to help Arsenal to a 2-0 win over West Brom in the Premier League on Monday.

The France international made it four goals in six league games since arriving from Lyon and Wenger praised the 26-year-old.

"He's not only a goalscorer, his link up play is good," Wenger told a news conference.

"He fights as well, he's not fazed by the physical challenges that West Brom gave us and overall he looks to adapt very quickly and very well."

The win saw Arsenal extend their unbeaten run to five matches in all competitions since their 4-0 humbling at the hands of Liverpool.

Wenger has been pleased with his team's response since that defeat as their win over West Brom lifted them into seventh in the table.

"Yes of course we are in a different position, a different mental aspect as well," he said.

"But we know we live in a world where when you miss a game like where we did at Liverpool, you face a very difficult environment afterwards.

"There's only one way to respond, that is to show your character and respond with results on the pitch."