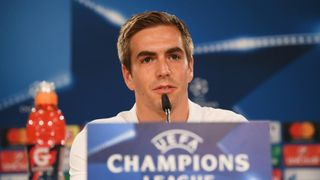 Bayern Munich skipper Philipp Lahm is adamant the Bundesliga giants can cope with the potential absence of some key figures in the second leg of their Champions League quarter-final against Real Madrid.

Mats Hummels, Jerome Boateng and Robert Lewandowski are all doubtful – although the Poland international seems likely to feature at this stage – but Lahm remains optimistic over Bayern's chances of turning around their 2-1 defeat from the first leg.

"Of course, Mats is very important, but we have a few other options who could fill in in his position," Lahm said ahead of the game at the Santiago Bernabeu.

"We all love these games and Mats will do everything within his powers to be there. I am not a doctor, but it would be great if at least one of our centre-backs would be available.

"Lewandowski scores a lot of goals and is very important for us, but we still have a lot of quality even when some key players are missing. We will put out a team that will do everything to win.

"We have already shown in the past that we can also win away games, but it is clear that we are the underdogs.

"It will be very difficult, but I believe in the team and I am confident it will not be my last game in Europe."

Carlo Ancelotti's side turned in an underwhelming display in Saturday's 0-0 Bundesliga draw with Bayer Leverkusen.