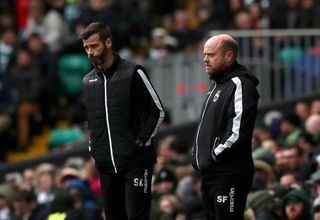 Laidlaw produced a string of impressive saves during the 0-0 draw in the Ladbrokes Premiership, including a second-half penalty save to deny Osman Sow.

Sow’s weak effort was comfortably saved after Marcus Fraser was adjudged to have bundled Liam Millar over inside the penalty area.

And Ferguson praised Laidlaw for the way he has bounced back since making a mistake to allow Tony Andreu to score in their 2-1 win over St Mirren earlier this month.

Ferguson said: “Ross Laidlaw was great for us but that’s football. He made a bad mistake a couple of weeks ago and had to brush that off and take what was coming to him – which he did, head-on.

“So for him to become the hero for us with the penalty save, he deserved that for all the work he put in after that mistake. He was down for a spell after that but he works very closely with Scott Thomson, our goalkeeping coach, and he got him back on track fantastically well.

“Ross did well throughout the game, not just at the penalty, which wasn’t even the best save he made. He’s back in a good place and we’re going to need everyone this season. He’s there to make those stops and we’ll give him credit for that – he’ll enjoy watching Sportscene.

“He’s at the stage of his career where he should be number one and with Nathan Baxter injured, the opportunity is there for him because they’ll be competing for the jersey.

“We had a clean sheet today and I thought the back four were just as good as Ross was.”

Kilmarnock dominated the game and carved out a host of chances but could not find a way past Laidlaw.

The Rugby Park outfit crashed out of the Betfred Cup in midweek after losing a penalty shoot-out to Hibs and once again they faltered when they had a chance from 12 yards.

Kilmarnock manager Angelo Alessio, however, refused to point the finger of blame at Sow for his penalty miss.

Alessio said: “Osman of course is disappointed with the penalty. In midweek (Stephen) O’Donnell and (Niko) Hamalainen missed penalties but we don’t blame them because we are always a team.

“We stand and we fall together. If we win or lose we are always a team. I don’t blame individual players at all.

“The positive thing is that we created chances.

“It was a frustrating afternoon for us. I saw a good spirit about my team, we created seven or eight opportunities to score and their goalkeeper made some good saves.

“We also hit the post in the first half, and missed the penalty. Everyone could see we tried hard to win the game.”