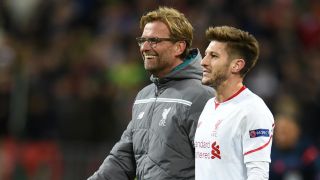 Liverpool midfielder Adam Lallana has stressed Jurgen Klopp is not to blame for the club's recent wave of injuries.

Former Liverpool captain Graeme Souness was among those to suggest that Klopp's training methods could be having an adverse effect on Liverpool's players, but Lallana has refuted such suggestions.

"Sometimes you are just unlucky with injuries and we've had a lot of bad luck recently. We've got a world class medical team here. We certainly can't point the finger at anyone," the England playmaker told the Liverpool Echo.

"We have had a change of manager this season. When that happens lads look to impress more and give more. But I don't think these injuries have got anything to do with any changes to our training.

"We've had so many games recently that we've mainly been doing recovery sessions between games so it's not as if the training has been really intensive. You can't blame that.

"It's just a physical game. Look at the amount of games we've had over the Christmas period. If you look at teams around the league, I bet you'll find the number of injuries has definitely increased.

"Not every club is in the semi-finals of the League Cup, playing in the Europa League and about to get going in the FA Cup. We've also had some massive Premier League fixtures. It's been a tough run and with the demands on players nowadays there's bound to be injuries."

Liverpool travel to Exeter City in the FA Cup on Friday.