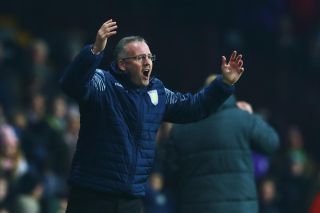 Gabby Agbonlahor put Villa ahead against the run of play and they maintained that advantage until the last 10 minutes when Nathaniel Clyne finally broke down the stubborn resistance of Ciaran Clark and Jores Okore to hit a stunning equaliser.

Okore made his return to the Villa XI having sat on the sidelines since September last year due to a knee injury and played alongside Clark for the first time.

But the duo showed no sign of unfamiliarity and defended stoutly throughout as Villa frustrated their high-flying Premier League opponents.

"I thought we did really well," Lambert told Sky Sports.

"We've got six players out: three centre-backs, [Christian] Benteke's out, [Libor] Kozak's out, [Fabian] Delph's out - big players for this football club so it was a lot for us to carry.

"But I've got to say the two centre-backs, both young lads, were outstanding.

"Jores has been out for 14 months, I thought he was fantastic.

Agbonlahor's goal was only the sixth Villa have scored this season, while a crowd of just over 25,000 inside Villa Park was the lowest for a Premier League game in the 21st century.

But Lambert remains confident he is the man to bring excitement to the Villa faithful.

He added: "It's not for a lack of trying, Andi [Weimann] has had a great chance, Charlie [N'Zogbia] has had one cleared off the line so there's chances there to score.

"I've dealt with pressure all my life through being a footballer and a manager, it's part and parcel of the game.

"It's a great job. You have problems, the secret is to find the solution for them.

"It's a key period from now to May. Every weekend you go play is a challenge but it's something you have to rise to."