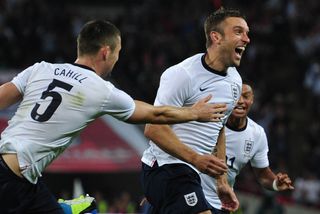 The 31-year-old nodded home from a corner with his very first touch of the ball after coming on as a substitute in the 70th minute, handing the hosts a 3-2 lead that they did not relinquish.

And afterwards he could hardly hide his delight, admitting that he has struggled to contain himself during his first week in training with Roy Hodgson's squad.

"That's what I've been dreaming of for probably all my life. It means so much," he told ITV.

"It was my first chance. (A) corner, obviously I fancied myself and what a ball from Leighton (Baines). It went exactly where I would have wished it to - and I managed to get rid of my marker and get a firm header.

"I tried to play it cool (all week) as if it didn't bother me but in reality I wanted to scream. It was brilliant. And I have to say a big thank you to the lads who made me so welcome.

"I had respect for them anyway but being with them for a few days, I have even more respect."

Lambert has enjoyed a nomadic career in England, and spent some time without a club prior to a move to Macclesfield Town in 2001 which sparked a remarkable rise up the ranks.

He has since gone from the third tier of English football to the very top, and scored 15 goals in the Premier League for Southampton in 2012-13.

When asked to whom his debut strike was dedicated, Lambert replied: "To my family who were up there watching, to my wife at home. And Southampton.

"They have been absolutely superb for me from the second I went there."

"Rickie Lambert has been so enthusiastic he's been like a young boy with a new toy. When he came on the first thing (coach) Gary Neville said was he's going to get us a goal," Hodgson reflected.

"He almost got three and I'm delighted with him. As a man who has worked very had to get this chance, I recognise that same drive in him. He's got great composure in front of goal."