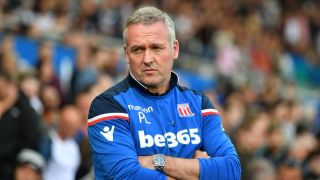 Paul Lambert believes he needed more time to save Stoke City, although he concedes a lack of quality in attack also cost the relegated Potters.

Stoke's fate was sealed last week with a defeat at home to Crystal Palace, meaning a last-day 2-1 win at Swansea City counted for little - even if it dragged the Welsh club with them into the Championship.

And Lambert thinks there must be changes behind the scenes if Stoke are to learn from their demotion and return to the Premier League, with attacking additions a priority.

"Fifteen games is never long enough," he told BBC Sport. "There were things wrong, without a doubt.

"I did what I think is right, but we drew games that we should have won. A little bit more quality across the top and we wouldn't be in this position. [In terms of] effort, I can't ask for any more.

FT: Goals from Badou Ndiaye and Peter Crouch cancel out Andy King's early opener as the Potters finish the season with a win. May 13, 2018

"I'm sure the club will know what is wrong and what is right. With that fanbase behind you, you have a chance.

"There's a core of players, but there's a turnaround that needs to happen. It's a really good core, if they have the right players that want to be at the club. I'm sure the club will learn from what has happened this year."