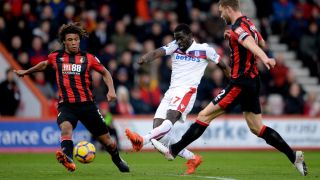 Senegal international Ndiaye was lively throughout his first Premier League appearance before being withdrawn on 71 minutes at the Vitality Stadium.

A deadline day arrival from Galatasaray for a fee of £14 million, the midfielder supplied the cross for Xherdan Shaqiri's early opener and went close to scoring midway through the first half.

And despite seeing his side slip back into the bottom three, Lambert found plenty of positives in Ndiaye's encouraging performance.

"He has only trained with us once and that was [Friday]. I knew he would tire because he hasn't trained or played for a little bit, but we have got a really top midfielder on our books."

Stoke had looked on course to maintain their unbeaten run under Lambert when Shaqiri nodded them ahead in the fifth minute.

But the former Norwich City and Aston Villa boss was left frustrated by the collapse which saw the Potters concede twice in the space of nine second-half minutes.

"I thought we were excellent. How we lost it I don't know," he said.

"At the very least we should be leaving here with a draw.

"The progress has been excellent and I'm delighted with the way the lads played, but I'm gutted for them because I don't think they deserved [defeat]."