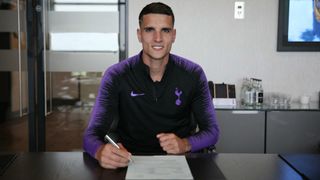 Erik Lamela is hoping his new Tottenham contract brings a change in fortune after his troubles with injury.

The Argentina international missed most of the 2016-17 Premier League season with a hip injury, but battled back to feature 25 times last term.

Lamela penned a contract extension until 2022 on Friday and he wants to have a big impact for Spurs as they look to challenge for major honours once again.

"It's difficult to be injured, especially for a long time, but I never gave up. Everything is in the past now," he told the club's official website.

"To be strong mentally helped me a lot and now I'm ready to play and to enjoy.

"I'm training hard every day to be ready for the first game. Hopefully I stay like this, injury-free, for the whole season. I’m very confident this season will be good for me and for the team as well.

"I want to be scoring goals, playing well, fighting for the team, everything I can do I will do.

"I'm sure the team will be good next season."

Although Spurs are yet to make any signings this summer, they have successfully tied down several key players to new deals in a boost to Mauricio Pochettino, who has also signed a new contract.

Forward Son Heung-min signed a fresh five-year deal earlier on Friday, and talisman Harry Kane also penned a six-year contract prior to flying off for the World Cup, where he won the Golden Boot.