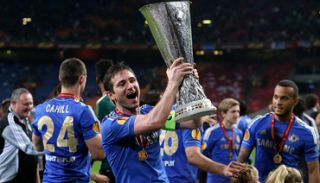 The 34-year-old midfielder, who broke Chelsea's all-time scoring record when his double against Aston Villa on Saturday took him past Bobby Tambling's tally of 202 goals, looks like getting the new deal he has craved all season.

"I really, really hope to be around next season," Lampard told ITV Sport as the victory celebrations went on around him.

"With a game tonight and another coming up against Everton this Sunday we haven't sat down and signed anything but I really hope to do so and things are looking good. The club have been brilliant."

Lampard's existing deal runs out at the end of the campaign and his future has been the subject of intense media speculation all season.

The England international captained Chelsea on Wednesday in the absence of the injured John Terry and the two club stalwarts went up to collect the trophy together at the end of the game before holding it aloft to the delight of the fans.

"It's been an amazing time for all of us involved," a delighted Lampard said. "Talk about ups and downs in the last two years... but this is a big up.

"We're a group, a team, and it was tight tonight after the long season we've had," he added referring to their gruelling 68-game campaign.

"No one deserves this more than Branislav Ivanovic, he has been fantastic," said Lampard of the Serbian defender who headed the winning goal in stoppage time.

"You make your own luck but we stick together in this group. The club deserve this."

Fernando Torres put Chelsea in front with a fine solo goal in the 59th minute before Oscar Cardozo levelled nine minutes later with a penalty.