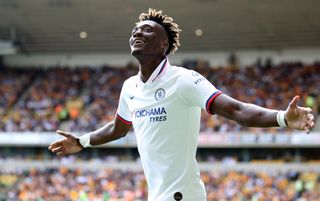 Abraham rose to the top of the Premier League scoring charts on seven goals as the treble at Molineux added to braces in each of his previous two appearances.

The 21-year-old, who won the two senior England caps he has to date in friendlies in 2017, was not part of Gareth Southgate’s Three Lions squad for the recent international break.

Asked about Abraham potentially being considered for the next England squad, Lampard said: “The way he is going, it is obviously going to put him into that bracket.

“The three different types of goals he scored were exactly what you want from Tammy. A messy one, a good header and then a fantastic feet and finish goal.

“He has to sustain it and has to get even better. He has to be hungry, which I know he is. He can never rest on his laurels, because there is more work to be done.

⚽️⚽️⚽️ Tell us how it feels to get your first @PremierLeague hat-trick, @TammyAbraham… 👏#WOLCHEpic.twitter.com/BM7e6AsWc1— Chelsea FC (@ChelseaFC) September 14, 2019

“And that England squad is a few weeks away. So he needs to keep playing at that level and he’ll have a great chance, I’d suggest.”

Nigeria have not given up on persuading Abraham to switch to them, and when Lampard was asked if he had spoken to the player about that, he said: “No.

“I don’t really. That’s obviously not my choice. I know Tammy has been in England squads before and I’m not surprised Nigeria would want him. But it’s a question for him I suppose”.