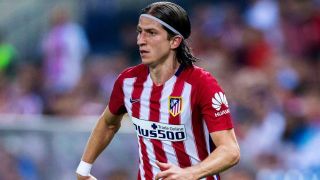 The result ensured that Diego Simeone's side maintain their position at the top of the table and extended their fine run of form to nine victories in their last 10 league games.

The visitors were made to work hard for the points, however, as Las Palmas produced a strong and spirited performance which belied their lowly 16th position in the table.

Atletico goalkeeper Jan Oblak was called upon to make several vital saves as Quique Setien's side looked to continue their recent resurgence and edge further away from the relegation zone.

Ultimately, however, they were undone by Filipe's stunning 17th-minute strike and a pair of clever second-half finishes from the impressive Griezmann, slumping to their fourth home league defeat of the campaign.

In a lively, high-tempo start to the game, home goalkeeper Javi Varas was called into action after just five minutes to make a sprawling save as Luciano Vietto attempted to slide home a Juanfran cross

But Las Palmas were similarly quick out of the blocks. Vicente Gomez and the in-form Tana were both denied in the space of a minute by fine stops from Oblak.

Having survived that double scare, Atletico responded in style by taking the lead on 17 minutes.

Juanfran swept a ball in from the right touchline which picked out Filipe striding unopposed into the box, and the Brazilian defender unleashed a ferocious left-foot strike that crashed into the top corner.

Undeterred by that early setback, the hosts continued to flood men forward and Atletico were grateful to Oblak again on 32 minutes as the Slovenia international kept out a stinging strike from Daniel Castellano.

And Setien's men then had a penalty appeal waved away shortly before half-time when Diego Godin appeared to shove Willian Jose over in the box.

The visitors should have doubled their advantage early in the second half, but having been played in cleverly by Vietto, top-scorer Griezmann delayed his shot, allowing Varas to make the save.

The Frenchman was not to be denied on 68 minutes, however, cleverly timing his run to beat the offside trap before calmly beating Varas.

Seconds earlier, Roque Mesa had come within inches of scoring the equaliser for the hosts after fine approach work from Willian and Jonathan Viera.

The second goal seemed to take the wind out of Las Palmas' sails, however, and they rarely threatened in the latter stages.

Instead, it was left to Griezmann to add the gloss to Atletico's result, latching onto Koke's neat pass in stoppage time to register his 12 Liga goal of an ever-improving campaign.

-Filipe Luis' goal is the first in this La Liga season both scored and assisted by a winger.
-Juanfran has supplied an assisted in at least one league game for 11 years in succession (36 assists between 2006 and 2016).
-Antoine Griezmann has scored five of his last eight Atletico goals away from home in La Liga, all of which came in the second half of games.
-No player has scored more braces in La Liga than Griezmann since he joined Atletico last season (nine, equal to Messi)
-In this match Atletico conceded the most fouls in an away game in this La Liga season (21).
-Atletico have 13 clean sheets, more than any other side this season in the top five European Leagues (equal to PSG).