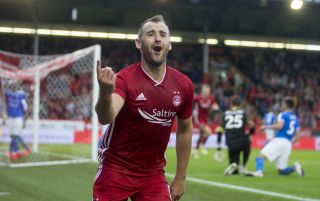 Niall McGinn returned from injury to send Aberdeen on their way to a Europa League win over RoPS Rovaniemi – but a goal from the Finns changed the complexion of the tie in stoppage-time.

Goals from McGinn and Sam Cosgrove either side of half time appeared to have given the Dons a comfortable 2-0 first-leg lead in the first qualifying round.

But a late away goal from Tommi Jantti gives the Finns hope – and the Dons will hope their lack of cutting edge in front does not come back to haunt them next week.

Aberdeen had looked the more threatening of the sides throughout their 2-1 victory, with Welsh international Ryan Hedges in particular impressing on his first competitive start.

Cosgrove should have had the home side in front after 10 minutes, as he found space in the penalty area to meet Andrew Considine’s low cross, but the usually reliable striker side-footed wide from close range.

Hedges forced former Inverness goalkeeper Antonio Reguero to push a curling effort round the post shortly afterwards, but it was not all one-way traffic.

The Finns looked threatening in advanced areas with Aleksandr Kokko seeing a shot deflected wide midway through the first half, and Youness Rahimi seeing a similar outcome after stepping away from Shay Logan.

But the home side remained the more threatening with Mahamadou Sissoko, the former Kilmarnock man, cutting out a McGinn cross just before the half hour as Cosgrove lurked ominously.

McGinn missed the last six weeks of the season with an ankle injury but recovered from surgery just in time to start and he opened the scoring in the 36th minute. The Northern Ireland international stepped across his man to latch onto a low Hedges ball from the left, before dinking a clever finish over the diving Reguero from a tight angle.

McGinn almost added an assist three minutes later, digging out a cross from the left that left the goalkeeper at full stretch to deny Cosgrove.

Lewis Ferguson also tested the Spanish goalkeeper and the second half was just two minutes old when the Dons added their second.

Debutant Jon Gallagher was the provider with a low ball in from the left, Cosgrove this time making a near-post run and doing enough to force the ball past Reguero who may feel he could have done more to block the shot.

Aberdeen piled on the pressure and only a fine save from Reguero denied Cosgrove a second after a fine ball in by Scott McKenna.

Cosgrove saw Reguero push away a powerful strike after a charge led by Gallagher in the final minute and the Finns got their lifeline when Jantti stroked home with almost the last kick of the game.