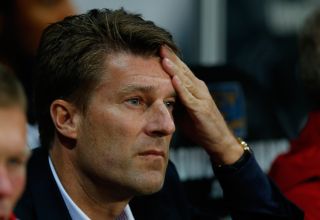 Michu's goal, his fourth in this season's competition, had looked set to extend the hosts' 100 per cent Europa League record on Thursday.

But goalkeeper Gerhard Tremmel's foul on Ibrahima Balde handed the Russians a last-gasp route back into the contest.

Cisse stepped up to convert his penalty with virtually the last kick of the game and though Laudrup admitted the visitors were worthy of a point, he was disappointed not to have taken all three.

"I think overall it's a fair result but of course when you are 1-0 up in injury time, you have the ball, they get a counter attack…we should have just kept the ball," he told ITV.

"That's a little frustrating. But again I have to repeat, watching the game overall, I have to say a draw is a fair result.

"They had two or three good half-chances. We had a lot of possession but did not create so much. (The) second half (was) much better.

"We have to play until the last second. (With) seven points, we are still top of the group but now we will have to do our work, away from home as well."

Michu's 68th-minute strike, which came at the end of an excellent move involving Jonjo Shelvey and Alejandro Pozuelo, illuminated an otherwise uneventful match.

But, just as it looked as though Swansea had done enough to make it three wins from three in the group stages, Tremmel's rush of blood and Cisse's subsequent spot-kick denied them.

"(It is) massively disappointing to be honest," he said.

"A win here would have been great. We weren't at our best. Fair play to them – I think they gave it everything, their team.

"But we're disappointed. That at the end is a sucker punch.

"We weren't at our best in the first half. In the second half we were doing really well but the last 15 minutes, you have to hold out in games. We've switched off for 10 seconds and that's what happened."