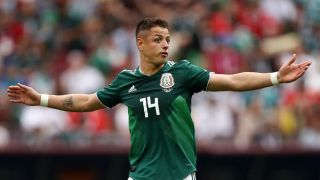 Stan Lazaridis wants West Ham to persevere with Javier Hernandez after 'Chicharito' offered a reminder of what he can do by starring for Mexico in their surprise World Cup victory over Germany.

Hernandez has not always produced his best form at London Stadium, but ex-Australia international Lazaridis, who played for West Ham from 1995 to 1999, hopes new head coach Manuel Pellegrini persists with the former Manchester United marksman.

"You've got to remember certain players perform better [in different systems]," he told Omnisport and Goal.

"The Mexico team are all in sync and I just feel with Hernandez he wasn't quite clicking with his midfielders and strikers [at West Ham].

"He's a good player, I just felt that cohesion didn't quite work whereas in Mexico they're all instinctive and all knew where they were - they were really good and surprised me," he added, referring to the shock victory over the 2014 winners.

"I would persevere with Hernandez because he's just something different that the Hammers don't have and until you get someone different, [that would] be the only time I'd let him go."

Mexico face South Korea in their second match of Group F in Rostov-on-Don on Saturday.