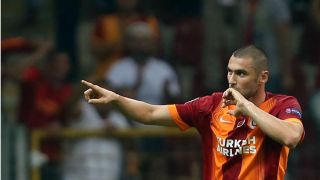 Speaking at the Wyscout Forum, Ergun said the Super Lig champions turned down bids for the prolific 30-year-old from a number of clubs including the Serie A outfit.

"Yilmaz is a great striker, we received a lot of offers for him," Ergun told Sky Sport Italia.

"We even got one from Lazio. If a new proposal arrives we can sit down and talk about it. Everything depends on Burak Yilmaz wishes.”

Since signing for Galatasaray in 2012 Yilmaz has been one of the most prolific goalscorers in Europe.

The striker has five goals from nine league appearances so far this season, but Galatasaray are third in the Turkish Super Lig five points adrift of leaders Besiktas and three off rivals Fenerbahce.